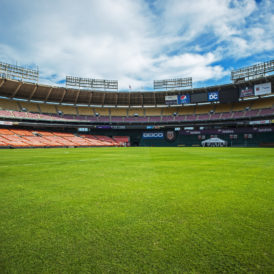 It was a beautiful evening before the game. The venue was prepped and clean. The team was getting ready in the locker room. The game was only two hours away. Popcorn was popping and retail merchandise was being straightened up. Young fans are excited for their first professional sports game ever! Then, with hundreds of staff ready and waiting, the doors were finally unlocked AND… half a dozen fans trickled in slowly. Not the most climactic opening, but the children who are enjoying their first game ever with dad don’t care. On the other hand, the venue manager with a labor budget is a little more concerned.

It happens, and the fact is, sometimes attendance is lackluster or people decide that showing up a few minutes late isn’t a big deal. In my experience described above, the team’s record was decent and the opponent was average. It was a Monday night and the weather was perfect. Due to these and many other reasons attendance was projected to be low. Just after doors opened and guests trickled in one or two at a time; one of the directors of the facility and I took a walk around. We noticed every entrance was fully staffed with twenty or more employees and eight metal detectors. With several entrances being utilized, we were looking at almost one hundred staff and most of them with nothing to do. To top it off, peak ingress for guests wasn’t expected until the game started. How many games or events could this happen to? How many thousands of dollars are wasted every year? How many avoidable OT hours are paid and additional ACA healthcare payments made? We cannot avoid all of it, but with a little time and effort spent on staffing we could save many thousands of dollars easily. The Oakland A’s have utilized staggered staffing for years. By utilizing four different staffing levels, including variations for weekday vs. weekend games, they were able to save approximately 9% in annual labor costs.

The idea of multiple staffing levels based on factors like attendance is not new, but sometimes it is good to revisit the subject and give the facility a quick analysis. Even walking around before certain events and recording what you see can be helpful. Attendance and staffing needs can be driven by many things including, but not limited to: day of the week, weather, a team’s record, the opponent’s record, new players, promotions and giveaways, state/federal holidays, celebrity appearances, etc. The Phoenix Suns’ Analytics Team has worked on several employee staffing metrics using this kind of data to better project attendance. Knowing attendance is only one aspect. Another question is: when should staff arrive, how many, and who? Staggered shifts can be the easiest fix. Bring in the minimum number needed early, and more staff later. This also allows for earlier staff to leave prior to accumulating OT in case the event goes long. There is not a one size fits all solution for all venues, even for the sport or the region.
Positioning and Redeployments:
Another popular staffing method is to redeploy staff that are primarily used before the event to other positions during the event. For example, ticket takers could be redeployed as ushers after the event has started. Security officers, who are checking bags or wanding at ingress, could be moved to a roving position at the end of ingress. Additionally, positions might be redeployed towards the end of the event to prepare for egress. Sometimes, you may also assign an employee to the same position consistently, but you should always consider the event. For example, Adam may be a great security officer, but during an intense concert you may want to a more physically imposing employee… preferably a veteran with some Jiu Jitsu experience. One of the most unique positioning methodologies I have seen is at AT&T Stadium (at the time Cowboys Stadium). After event staff check-in, a receipt is printed with a section, row, and seat number that the employee reports to. The supervisors received a pre-printed report of the names of their staff and seat numbers assigned to them. If someone is missing they know exactly who it is and can call a fill-in from what they call “Special Teams”. At this point the change is noted, and the staff is off to their briefings and positions. This is a fantastic system, for this venue, while others may need to function differently. I have to give special credit to Mr. Paul Turner for this process.

Story from the Field:

One of our clients shared a story they had regarding lower staffing levels. A section only sold ten tickets so they had that usher support a wider area instead of bringing in one per section. This would normally not be a problem, but it just so happens one of those ten tickets was for a brutally rude heckler. Normally, an usher for that section could address the issue immediately, but more time was taken and the guest experience suffered.
Making sure you have enough staff to provide the guest with the best experience is an art and a science. In the ever changing world of sports and entertainment, this is something that is always on our mind and to strike that balance can be challenging. However, it doesn’t mean we can’t be smart about managing all those hours and labor too.